Between the market’s big rally since March’s low and the low interest rate environment it looks like we’ll be stuck in for months (if not longer), it would be easy to give up a search for new dividend stocks. Don’t do it. The fact is, there are plenty of income-producing companies that can be…

added to your portfolio for little more than a song. Two names, in particular, stand out as ones to consider.

It remains to be seen if the auto business will stage a full recovery from the fallout of the coronavirus outbreak. The industry was already struggling headed into the contagion, after reaching cyclical “peak auto” sales sometime in 2016.

But, for Genuine Parts Company (NYSE:GPC), it doesn’t really matter. The average car driven on U.S. roads is now nearly 12 years old, according to data from IHS Markit, which further reports there are more than 278 million vehicles being regularly used by the nation’s drivers. They may be better and last longer than they ever have, but with that many vehicles still in use, the need for repairs is sure to be steady. Genuine Parts will always have a healthy market for its replacement auto parts.

Largely lost in most discussions of the company is the fact that it’s not just car parts. That’s still the lion’s share of its top line, accounting for 56% of its first-quarter revenue. But another one-third of last quarter’s revenue was driven by sales of industrial machinery. The remainder came from business products like office furniture and cleaning supplies. The mix of different product categories limits sizable swings of the organization’s top and bottom lines, which in turn means the income behind its dividend is relatively well protected.

To that end, while a rocky economic environment may be waiting for all of us in the foreseeable future, Genuine Parts Company has some wiggle room. Although its first-quarter numbers weren’t quite as strong as expected, the projected twelve-month dividend payout of $3.16 per share is still less than the $4.20 worth of earnings analysts are currently modeling. That should be the worst of any earnings headwind too. Thomson Reuters data calls for new profit growth starting in the third quarter. 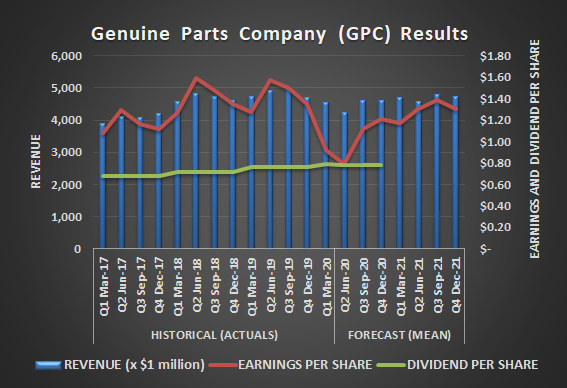 By the way, at the stock’s current price of $88.50, Genuine Parts Company is valued at less than 17 times next year’s anticipated profits, and yielding 3.7%.

← Here are the Best and Worst Stocks During the First 100 Days of the Coronavirus Pandemic
The Risk-Reward in the Stock Market Isn’t Looking Good, Warns Fund Manger Overseeing $16 billion →