When the market crashed in March, many investors were left flatfooted, unsure of what to do. Berkshire Hathaway vice chairman Charlie Munger used the word “frozen” in an interview with The Wall Street Journal when describing the public’s reaction to the markets earlier this year, admitting that…

he himself had no idea what was ahead for the economy.

And that’s why many people missed the deals that were right in front of them: because the crash was so unexpected and unpredictable. You can be prepared for the next crash — even if it’s not as drastic — by pinpointing investments that you’ll want to target when it happens. These three stocks in particular could become great buys: Canopy Growth (NYSE:CGC), Roku (NASDAQ:ROKU), and Innovative Industrial Properties (NYSE:IIPR).

This Canadian pot producer has seen better days, struggling to grow sales during what management has admitted is a “transition year.” But new CEO David Klein, who came over from Constellation Brands this year, is working to improve the Ontario-based company’s bottom line. In April, Canopy Growth announced it would be altering its strategy and moving out of some markets, including Lesotho and South Africa, while scaling back operations in other parts of the world. It’s also laid off hundreds of workers this year as it looks to strengthen its margins.

The company is still focused on growth, though, having shipped its first tetrahydrocannabinol (THC)-infused products in Canada March. Through its partnership with Acreage Holdings, it will be making its beverages available to the U.S. market as early as next summer. Since marijuana products remain illegal on a federal level in the U.S., marijuana products can’t cross from Canada to the U.S., nor can they cross state lines. (The only exception is hemp-based products, which contain very low levels of THC.) Because of this, it’s likely that Canopy Growth will simply share its formula for cannabis beverages with Acreage, and the company can then produce the beverages in its markets of choice.

In its most recent results, released Aug. 10 for the period ending June 30, the company reported a net loss of 128 million Canadian dollars. Canopy Growth has incurred a loss in each of its past five quarterly results. But there’s potential for the company to improve these numbers next year as its products gain more traction in both the U.S. and Canada and as it tightens its financials.

Nonetheless, you’ll want to wait for a crash or a sizable drop in price before buying shares of Canopy Growth. That’s because the stock is expensive when compared to its peers on a price-to-sales (P/S) basis. Canopy has potential, but its current valuation is overdone. 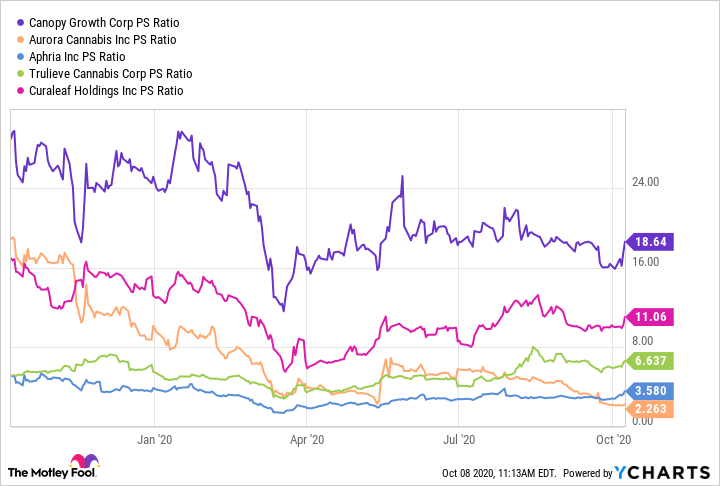 Unlike Canopy, Roku doesn’t need a transition plan or a turnaround; the business is doing great amid the coronavirus pandemic. With people spending more time at home watching television, the Los Gatos, Calif., company has seen strong results this year. In its second-quarter results, released Aug. 5 for the period ending June 30, the company reported that its users streamed 14.6 billion hours of content, a year-over-year increase of 65% and a notable jump from the 12.3 billion hours Roku reported in the first quarter.

Revenue of $356.1 million also grew 42% from the prior-year period. Unfortunately, with expenses also rising at a higher rate, Roku reported a net loss of $43.1 million, much larger than the $9.3 million loss it incurred a year ago. Investors are likely to accept those losses given that the company is still pumping out strong growth numbers, which could be boosted even further by the two new products the company announced Sept. 28: the Roku Ultra and Roku Streambar. The latter serves as not just a streaming device, but also a sound bar.

The only reason Roku isn’t a great buy right now is because, like Canopy Growth, it’s…