Three gold mining stocks fell in price enough recently to go on sale for prospective buyers who had been on the sidelines and now want another chance to buy shares in any or all of the positions at a discount.

Gold experts tell me that the slide is not surprising after the yellow metal became one of the fastest-rising investments so far this year with a 27.26% gain. With federal deficits on the ascent and…

talk by the leading presidential candidate Joe Biden about carrying out hefty tax hikes, gold could receive further support for its climb in the months ahead.

The price of gold recently hit an all-time high and experts predict further gains remain ahead, even though they consolidated in the past week. The outlook for the three gold stocks to buy on sale is positive for investors seeking a refuge from the falling U.S. dollar, inflationary federal spending and the growing threat of huge tax hikes if Democrats win the next election and take control of the White House and Congress.

The interest in gold is fueled by the most aggressive monetary and fiscal policies since 2008, said Mark Skousen, PhD, a Presidential fellow at Chapman University who also leads the Forecasts & Strategies investment newsletter. He currently is recommending B2Gold Corp. (BTG), a mid-tier Canadian gold mining company. 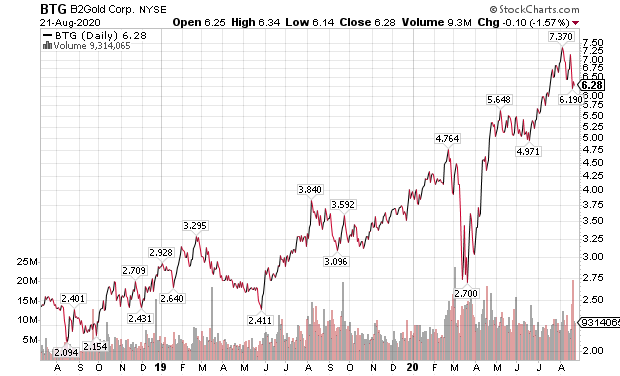 The gold mining company reported record revenues and cash flow for the second quarter of 2020, led by sales increase of 65% from the same period last year to reach $445 million. B2Gold is on target to produce more than one million ounces of gold in 2020, Skousen continued.

The stock briefly topped $7 a share before it pulled back when a political coup occurred in the West African nation of Mali, where BTG’s Fekola mine is based. President Ibrahim Boubacar Keita resigned and dissolved parliament hours after soldiers detained him at gunpoint in an unexpected move to seize power.

Despite the share price slipping in recent days, B2Gold officials stated that the company’s operations are continuing normally. Despite the deepening political crisis in that West African nation, B2Gold has not lost any operational efficiency at its Fekola mine. Plus, the Malian government owns a 20% stake, so it has a financial interest in preserving continued operation of the mine, as well as the safety of employees.

Because the government is a major shareholder, Skousen said…